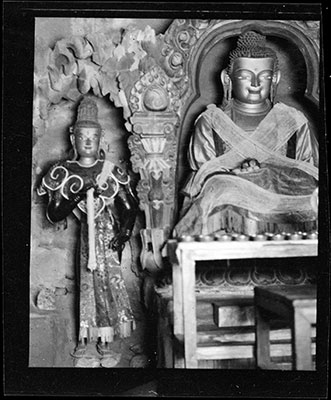 Figure of a seated Buddha Shakyamuni in a decorated niche at Nyethang Drolma Lhakhang. It is clothed in silk and two white scarves (khatag) are crossed across his chest. A table with bowls of water offerings are placed in front of it. The standing figure beside it is of a female Tara deity.

Other Information - Description: The central image of Buddha Shakyamuni with Tara at right side. The image of the Buddha is said to have been constructed in 1288. (TS)

Other Information - Background: See Hugh Richardson, "Some Monasteries, Temples and Fortresses in Tibet before 1950", in High Peaks, Pure Earth, Collected Writings on Tibetan History and Culture, London, 1998. Serindia Publications. p. 314 for a description of the site.