Image of Pabo Lochen near the temple of Nyethang 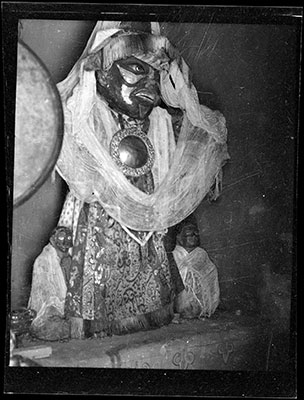 An image of Pabo Lochen (dpa' bo blon chen), a great monk minister of state who lived in the 9th century A.D., near Nyethang Drolma Lhakhang (sNye thang sgrol ma lha khang). The image has a black mask and the ceremonial brocade clothes of an oracle priest. It has a mirror on its chest and a white scarf (khatags) around the shoulders. The figures of two small boys wrapped in white scarves may be seen kneeling on either side of its feet. The edge of a hand held drum is on the far left of the image.

Manual Catalogues - Richardson Hand List. 'Album No. 2 [no.] 49. The Dpa'- bo Blon-chen at sNye-thang said to be the remains of a 9th century monk-minister.'

Other Information - History: Richardson recounts the history of this image of Bran-ka Dpal-gyi yon-tan, known locally as Pabo Lochen (Dpa' bo Blon-chen) in High Peaks, Pure Earth , London, Serindia Publications, 1998, p.314. "Not far away, [from Nyethang Drolma Lhakhang (sNye-thang sGrol-ma Lha-khang)] in a small stone building, is a strange figure about four feet tall with a large, grinning, black mask; it wears the dress of an oracle priest - a red brocade hat with eyes embroidered on it, and a robe of fine brocade with a mystic mirror ( me-long ) on its chest. The figures of two boys kneel beside the figure, and on its right side is a large drum. Underneath the robe is the stuffed skin of a human torso supported on a wooden trestle. All the figures are decorated in fresh white scarves which, together with the good condition of the robes, suggests regular devotion is paid. The tradition is that the figure, Dpa'-bo Blon-chen, is the upper part of the body of the great monk minister Bran-ka Dpal-yon, who was murdered by Glang-dar ma; it was sawn in half and thrown into the Skyid-chu. Half was washed up at Snye-thang and was recovered by two boys; the other half was swept down to Rtse-thang, but its fate is unrecorded. The figure at Snye-thang is revered as a yul-lha, a protective deity of the locality ". [TS 22/3/2005]