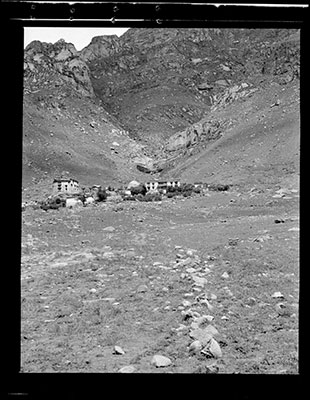 Phabongka monastery near Sera nestling against a rocky mountain side. The tower building can be seen on the left.

Other Information - Setting: Pha bong kha is situated 8 km west of Lhasa, it is one of the oldest Buddhist sites in Tibet. The monastery is built around Do Phabong gi thang (rdo pha bong gu steng). The site is said to be be King Songtsen Gambo's (srong btsan sgam po) hermitage. The monastery is also said to be where Thomi Sambhota created the Tibetan script. The monastery and the surrounding choten were extensively rebuilt by the 5th Dalai Lama who also used the monastery as a retreat. At the time of Richardson's visit the monastery would have been similair to the structure created by the 5th Dalai Lama. [TS 22/3/2005]