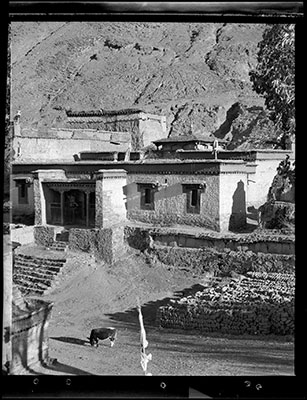 One of the three temples, the Tadrin (rta mgrin), at Tsi Nesar (rTsis gnas gsar) situated between Gyantse and Shigatse. It is situated opposite the Yum Chenmo temple. There is a cow in the foreground and a flight of steps leading up to the entrance of the temple on the left. There are stacked mud bricks in the courtyard and a prayer flag in the foreground.