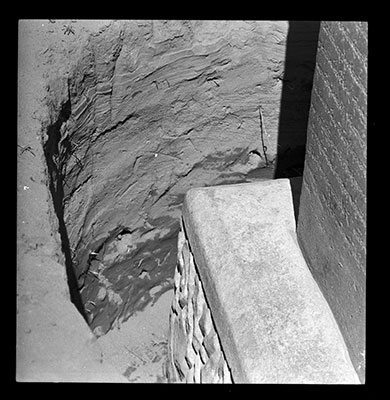 Base of the inscription pillar (rdo ring) at Karcung (skar cung) near Ramagang four miles from Lhasa south of the Kyichu river. A hole has been dug around the pillar to reveal the base of the pillar below ground.

Other Information - Historical background: Hugh Richardson includes a description of this pillar and a translation of the edict carved into the stone in, A Corpus of Early Tibetan Inscriptions , 1985, London: Royal Asiatic Society, pp. 72-81. "A great accumulation of sand, ... , had covered the stone pillar ... I had enough of the sand cleared away to be able to copy the whole text; and some time later I was able to clear the base on which the pillar stands and which was seen to be a massive block of stone carved with a pattern of mountains in the Chinese style. (p.72) [KC 17/3/2006]

Other Information - History: This is base of 9th Century inscription pillar at Karchung. The inscription marks the founding of Karchung Tsuglhakhang (skar chung gtsug lag khang) and the edit reaffirm the oath taken by king Tri Desongtsen (khri lde srong brtsan) to protect and promote Buddhism. [TS 2/1/1970]

Other Information - Location: Hugh Richardson mentions this site in, High Peaks, Pure Earth, 1998, London: Serindia Publications, p. 313, 'Near Ra-ma-gang on the south side of the Skyid-chu, four miles from Lhasa, is a small nunnery in quite a large enclosure in front of which is an inscribed pillar of the ninth century; and at considerable distance at each corner is a large mchod-rten, one of which had remains of glazed tiles in the appropriate colour for its geographic position. These were the remans of Khri Lde-srong-brtsan's great temple of Skar-cung (1949).' [KC 14/3/2006]