The Yum Chenmo temple at Tsi Nesar and guard dog 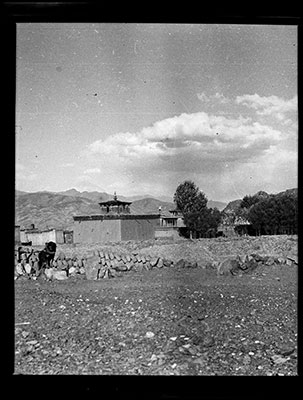 One of the three temples, the Yum Chenmo, at Tsi Nesar (rtsis gnas gsar) situated between Gyantse and Shigatse. It is a square, wooden-framed building with a small turret. Other buildings and trees may be seen behind it. There is a row of stones in the foreground and there is a large chained dog on the left.