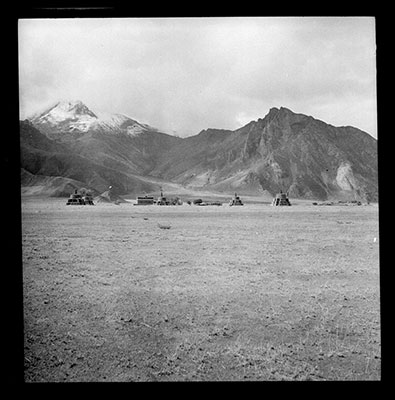 Reliquary monuments at Ushangdo ('u shang rdo) seen from a distance from the north with mountains in the background.

Other Information - History: Ushangdo ('u shang rdo) is situated on the east bank of the lower Kyi chu and historically is one of the most important religious sites. The Tibetan king Tri Ralpachan (khri ral pa can, 815-838 ) build a nine storey temple at Ushangdo in the 9th century AD. At the time of Richardson's visit the area was in ruin and traces of the original structure and complex can be seen. [TS 2/1/1970]