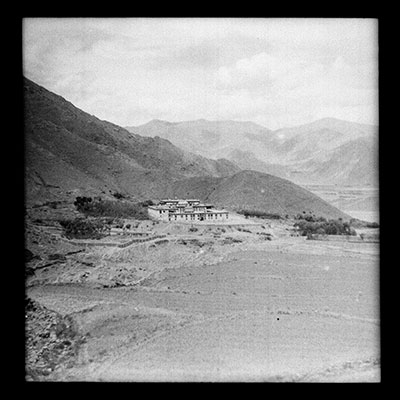 Taktra (Stag brag) monastery some eight miles west of Lhasa. There are fields in the foreground.

Other Information - Location: Richardson mentions this site in High Peaks, Pure Earth , London, Serindia Publications, 1998, p. 313, " ... on the west bank of the Skyid-chu just below the point where it is joined by the Stod-lung-chu, in a narrow valley is the monastery of Stag-brag (1950), a Dge-lugs-pa foundation built on the site of an ancient btsan-khang attributed to Srong-brtsan Sgam-po and preserving images of the Religious Kings said to have come from the old building." Also, "It is said that where the monastery now stands there was formerly an ancient btsan-khang , ... which is believed to have been built by Srong-rtsan Sgam-po ..." ( ibid . 230)