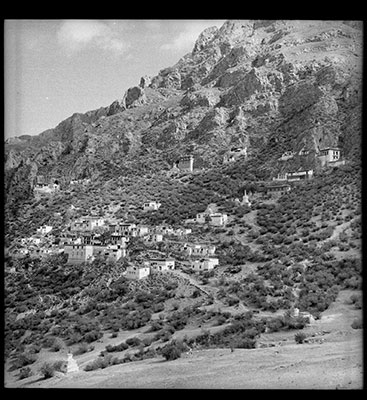 The hermitages, shrines and temples of Dra Yerpa (Brag Yerpa) set into the rocky hillside.

Other Information - Location: Richardson describes the site in High Peaks, Pure Earth , London, Serindia Publications, 1998, "Four miles east of Lhasa itself stands the little monastery of Ri-skya , and beyond it the foundation of Brag Yer-pa (1937, 1948, 1950), lying at the head of a unexpectantly green an pleasant valley about twelve miles norht-east of Lhasa. The sheer cliff face is honeycombed with caves to which monks from the city came for meditation. It is a place of ancient sanctity and has been inhabited reputedly since the time of Srong-brtsan Sgam-po, whose cave with his image and those of his wives is high up on the cliff, reached only by a ladder. ... Near the foot of the hill in a small stone building was a large bronze bell in the T'ang style bearing in early north Indian characters the Buddhist formula ye dharma hetuprabhava etc and another sloka in Tibetan." (pp 305-6) [KC 20/10/2006]