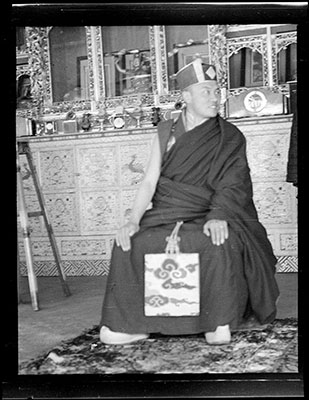 The 16th Gyalwa Karmapa Rangjung Rigpe Dorje (1924-1981) wearing the black crown (shwa nag) of the Kagyud order of Buddhism seated on chair in a room in his summer palace at Tsurphu. He is looking towards the right and smiling. There is a camera tripod on the left a display of clocks behind him. The wall behind him is composed of decorated panels and there are religious images behind glass panes.

Other Information - Biographical Information - The 16th Gyelwa Karmapa Rangjung Rigpe Dorje (1924-1981) born in Denkhok in Derge region of Eastern Tibet to a family called Athup. The Karmapa is recognised as the lead of Kagyu school of Tibetan Buddhism. He was recognised as the incarnation of the 15th Karmapa by the 13th Dalai Lama who received his first religious vow. The Karmapa fled Tibet in 1959 and founded Rumtek monastery in Sikkim. He died in Chicago, USA in 1981.[TS 9/3/2005]