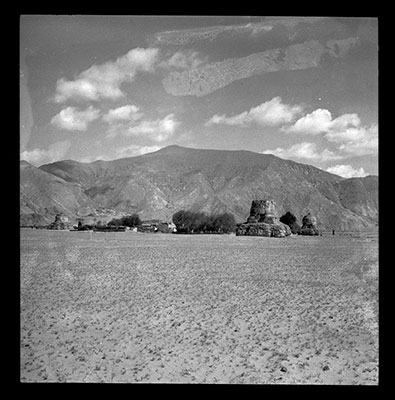 Reliquary monument (mchod rten) and doring (rdo ring) pillar at Karcung (skar cung) near Ramagang four miles from Lhasa south of the Kyichu river. There is a walled enclosure in the centre, housing a nunnery.

Manual Catalogues - Richardson's Hand List. 'Album no.2. Negatives i to 5 in damaged condition but worth rescuing if possible for archeological interest. [nos.] 1,3 Site of 9th century temple at Rama-sgang near Lhasa where there is the inscribed Skar cung edict. The four old stupas, one at each corner, are a feature of early temple sitses. e.g. Samye.'

Other Information - Hugh Richardson mentions this site in, High Peaks, Pure Earth, 1998, London: Serindia Publications, p. 313, 'Near Ra-ma-gang on the south side of the Skyid-chu, four miles from Lhasa, is a small nunnery in quite a large enclosure in front of which is an inscribed pillar of the ninth century; and at considerable distance at each corner is a large mchod-rten, one of which had remains of glazed tiles in the appropriate colour for its geographic position. These were the remans of Khri Lde-srong-brtsan's great temple of Skar-cung (1949).'