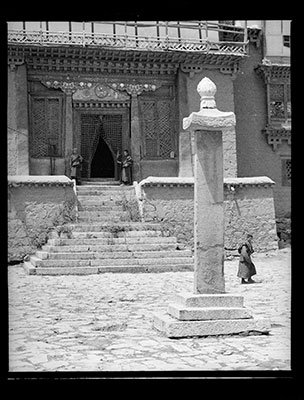 Inscription pillar (doring) in the courtyard of Tsurphu (mtshur phu) monastery to the west of Lhasa. The base is three-stepped and the finial has an engraved rounded shape on the top. The courtyard is stone paved and there are steep stone steps leading up to a monastic college in the background. There are monks either side of the decorated main entrance to the college and a monk in the courtyard beside the pillar. There are two light flashes at the top of the image.

Other Information - Location: Tsurphu lies about forty miles to the west of Lhasa on the Drowo lungchu river. " Mtshur-phu (1946-50) [is] the principal seat of the Karma Bka'-brgyud school and residence of the Zhwa-nag ("Black Hat") incarnation. [It was founded] in 1187 ... Its many buildings are closely grouped in a high enclosed wall overlooking the 'Gro-bo-lung-chu. The entrance on the west side is by way of a courtyard in which stands an inscribed pillar dating from the ninth century which has no obvious connection with the monastery." ( High Peaks, Pure Earth, H. E. Richardson, London, Serindia Publications, 1998, p. . 312) After passing through a narrow gate in the high wall surrounding the monastery one came to a wide paved courtyard with buildings on three sides, the west side being open. In the centre stood a stone pillar dating from the reign of Ralpachen and describing the foundation of a temple at Changbu in Tolung ... I was told later that the pillar was formerly opposite the main assembly hall, farther inside the monastery. ( ibid. 731) [KC 22/3/2006]