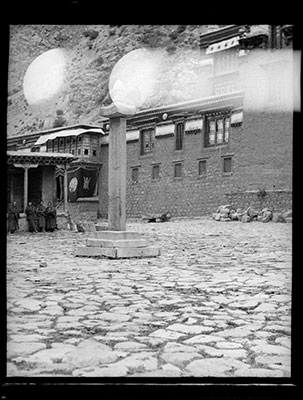 Inscription pillar (doring) in the courtyard of Tsurphu (mtshur phu) monastery to the west of Lhasa. The base is three-stepped pillar and the finial has an engraved rounded shape on the top. The courtyard is stone paved and there are monastic buildings in the background. There is a group of monks leaning against the low wall of a building on the left. There are two light flashes at the top of the image.