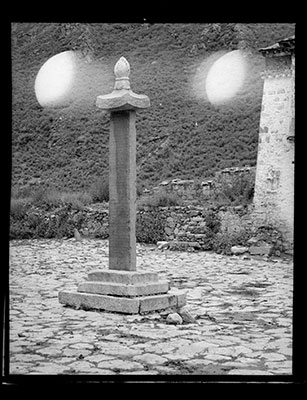 Inscription pillar (doring) in the courtyard of Tsurphu (mtshur phu) monastery to the west of Lhasa. The base is three-stepped pillar and the finial has an engraved rounded shape on the top. The courtyard is stone paved and the edge of a monastic building may be seen on the right. There are two light flashes at the top of the image.

Other Information - Tsurphu (mtshur phu) is situated in Tolung (stod lung). The monastery is the seat of the Karmapa, head of the Karma Kargyu (kar ma bka' rgyud) school of Tibetan Buddhism. The monastery was founded by Karmapa Dusum Kyenpa (1100-1193). Richardson visited Tsurphu twice first in 1946 and a second time just before leaving Lhasa in 1950. [TS 16/2/2005]
Exhibition -