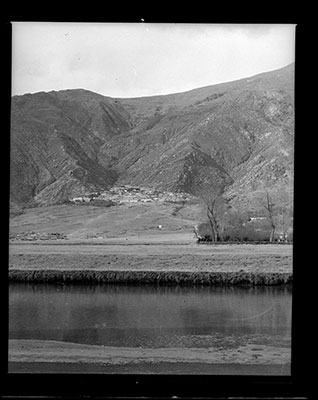 Drepung ('bras spungs) monastery nestling against a mountain. The Kyichu river flows in the foreground.

Other Information - History: Drepung ('bras-spungs) monastery was founded in 1416 by Jamyang Choje Tashi Palden (1397-1449) a disciple of Tsongkhapa founder of the Gelukpa sect of Tibetan Buddhism and named after the abode of Shridhanyakata in south India. It was the largest monastery in the world, inhabited by approximately 9000 monks of the Geluk sect, and was closely associated with the Dalai Lama lineage. It was a few miles north-west of Lhasa.

Other Information - Dates: This image has been dated to 1936-8 because it seems to have been part of a group of images that were developed as contact prints during this time, and which were distinctively cropped with a decorative edge [MS 16/12/2005]