Uninscribed pillar in a courtyard at Ushangdo 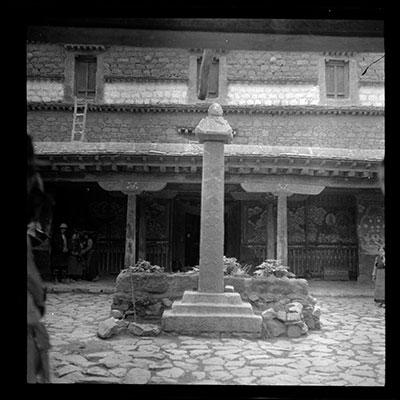 Uninscribed pillar surmounted on a tiered base in the centre of courtyard at Ushangdo. There is a low wall directly behind the pillar on which flowers are growing. Murals are visible on the cloistered wall of the building in the background which has pillars and cross beams and windows. There is a ladder outside the window on the left. Several people can be seen looking on.

Other Information - History: Ushangdo ('u shang do) is situated on the east bank of the lower Kyi chu and historically is one of the most important religious sites. The Tibetan king Tri Ralpachan (khri ral pa can, 815-838 ) build a nine storey temple at Ushangdo in the 9th century AD. At the time of Richardson's visit the area was in ruin and traces of the original structure and complex can be seen. [TS 2/1/1970]