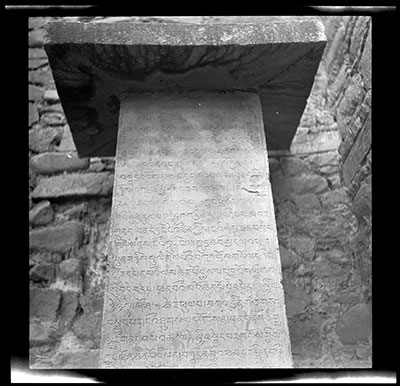 The top section of the east inscription pillar standing against the wall of the temple at Zhwa'i lhakhang monastery about fifty miles north east of Lhasa. It is one of a pair standing either side of the entrance to the temple.

Other Information - Setting: Richardson visited this site in 1948 and 1949 and describes it in High Peaks, Pure Earth , H. E. Richardson, London, Serindia Publications, 1998, p. 307. " ... in the open valley of the Mang-ra-chu, facing the point where the Skyid-chu, flowing from the north, turns sharply westwards, is the little Zhwa'i Lha-khang (1949, 1949), the 'Temple of the Hat'. It is approached through a courtyard where the three resident monks kept their cattle. At either side of the entrance to the temple is a stone pillar, now damaged, bearing inscriptions by Khri Lde-srong-brtsan in honour of the founder, the famous monk-minister Myang Ting-nge-'dzin bzang-po, whose ward and pupil he had been in his minority. A door opens onto a little enclosure with a white mcho-rten in the centre, beyond which could be seen through the open door of the temple the image of Rnam-par snang-mdzad (Vairocana) on the altar with the Eight Disciples of the Buddha on either side. ... the basic structure of the temple appeared to have survived unchanged since the early years of the ninth century. A little way from the building is a white mchod-rten containing the miraculous hat of Myang Ting-nge-'dzin. The legend tells how he had been promised as much grain as would fill his hat: putting his hat, which had a hole in it, over the granary, the grain poured through to provide he wherewithall to build his temple." [KC 27/9/2006]