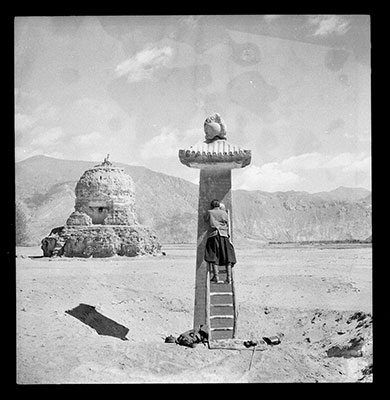 Richardson's orderly on a ladder propped against the inscription pillar ar Karcung. He is copying the inscription. One of the four reliquary monuments at the site is visible in the background.

Research publication - David L. Snellgrove and Hugh Richardson, A Cultural History of Tibet , 2003, Bangkok: The Orchid Press, p.36. 'The sKar-cung stone pillar at Ra-mo-sgang near Lhasa. It has an elaborate fluted stone canopy and a shell-like finial. The base is decorated by a Chinese-inspired mountain design.' [KC 29/9/2006]