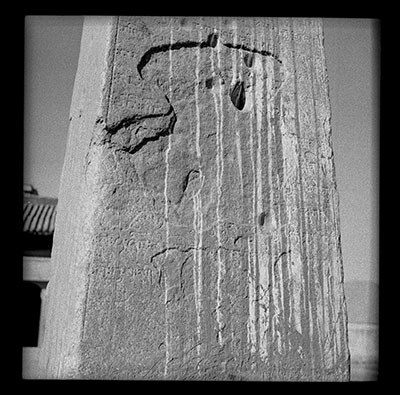 Middle section of the southern face of the Sho inscription pillar, Lhasa with extensive damage in the centre.

Hugh Richardson argues that the pillar was erected in 764 A.D or little later. The piller is inscribed on all four sides. For a full transcrition and translation, see: H. E. Ricardson, A Corpus of Early Tibetan Inscriptions" Hugh Richardson, A Corpus of Early Tibetan Inscriptions". Royal Asiatic Society, London. 1985. pp:1-25. [TS 4/4/2005]
Notes on negative index - '48 - end'