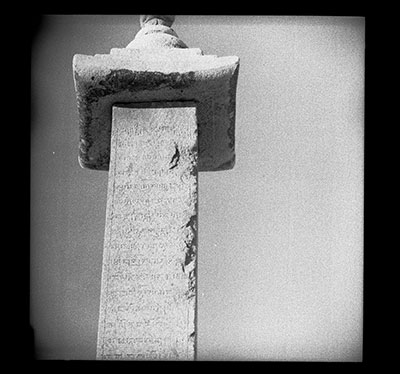 Other Information - History: Hugh Richardson argues that the pillar was erected in 764 A.D or a little later. The pillar is inscribed on all four sides. For a full transcrition and translation, see: H. E. Ricardson, A Corpus of Early Tibetan Inscriptions" Hugh Richardson, A Corpus of Early Tibetan Inscriptions". Royal Asiatic Society, London. 1985. pp:1-25. [TS 4/4/2005]

Other Information - Dates: This is one of a group of 25 images for which contact prints were made using the same printing out paper although with slighty different tonal qualities as some are very sepia toned. However, there is a very limited number of images in the collection printed out on this type of paper. One of the images in this group is from Samye and Richardson states that he photographed and copied this particular inscription pillar in 1949 [A Corpus of Early Tibetan Inscription s, Royal Asiatic Society: James G. Forlong Series, No. XXIX, p.26]. This suggests that the images may have been taken around that time [MS 17/12/2005