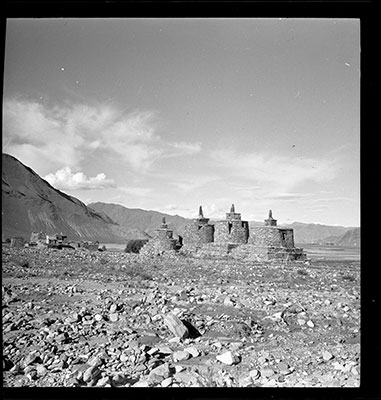 A row of four stone reliquary monuments (mchod rten) in rocky terrain at the mouth of the Phenpo chu river at Gyer ('dgyer). They are of an unusual stone construction.

Manual Catalogues - Richardson's Handlist, Negative book '9' 'Drikhung, Chongye etc.' [no] 96. 'Mchod-rten (stupas) near Gyer on right bank of Skyid chu near mouth of Phan-po valley, said to have been built to avert evil influences from the site of the Dga' ldan monastery before it could be built.' [KC 5/6/2006]

Other Information - Location: Richardson mentions this site in High Peaks, Pure Earth , London, Serindia Publications, 1998, p. 306, "At the mouth of the 'Phan-po-chu were four mchod-rten which had to be built before the construction of Dga'-ldan could be undertaken. They are known as the 'Dgyer (sp?) mchod-rten (1937). [KC 7/6/2006]