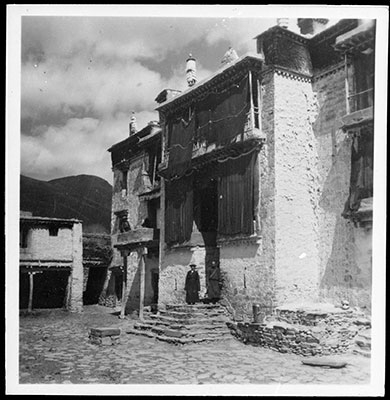 Two men standing at the top of a flight of steps leading up to the entrance of the Trikhang at Gyama. There are dark coloured woollen drapes over some of the window frames and the usual ritual roof decorations.

Manual Catalogues - Richardson's Handlist, Negative book '9' 'Drikhung, Chongye etc.' [nos] 88 - 91. 'The Rgya-ma valley is some eight miles downstream from Mal 'gro. The Khri-khang was the headquarters of one of the 13 Khri skor set up by the Mongols in the 13th century. The estate latterly belonged to the Hor-khang family. See Mkhyen brtse p 109.' [KC 5/6/2006]

Other Information - Location: Richardson mentions this site in High Peaks, Pure Earth , London, Serindia Publications, 1998, p. 306, "Further up the [Kyichu] river in a wide valley stands Rgya-ma Khri-khang " (1949), the former administrative centre of a khri ("Thousanf District") under the Mongols. It is surrounded by a square enclosure of trees and a low wall. Inside there are three large mchod-rten ... Before reaching the Khri-khang, one passes on the hillside a small stone tower reputed to mark the birthplace of Srong-brtsan Sgam-po and containing a fine image of him. [KC 5/6/2006]