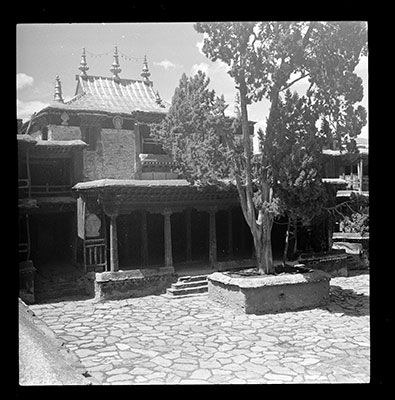 A paved courtyard in Lamo monastery. There is a tall tree surrounded by a walled enclosure in the foreground. The sloping roof of the temple appears to be gilded and is surmounted by the typical three pinnicles. The entrance to the temple has a beamed verandha.

Other Information - Location: Richardson mentions this site in High Peaks, Pure Earth , London, Serindia Publications, 1998, p. 306, "The La-mo (1939, 1949) monastery, further upstream and beyond Dga'-ldan, was founded in the eleventh century by Klu-mes Tshul-khrims shes-rab, one of the principal figures of the later diffusion of the faith. The monastery was patronised and enriched by the eighteenth century noble Stag-rtse Mi-dbang, who treacherously colluded with the Dzungars. His armour and weapons are kept in the mgon-khang . La-mo is the seat of an oracle-priest whose robe and helmet are on a throne in a side chapel. Some of the wall paintings showed Bka'-gdams-pa hierarchs but the monastery was latterly Dge-lugs-pa."