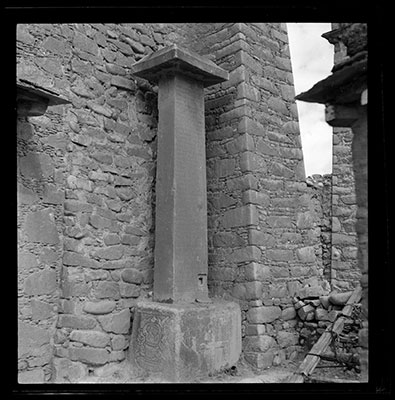 One of the two inscription pillars (the east one) which were on either side of the temple doorway in the courtyard of Zhwa'i lhakhang monastery. The pillar is resting on a square base the side of which is inscribed with a flaming jewel and the front with a swastika. The canopy is severe and undecorated. There is a coffered recess at the end of the inscription which once held the king's seal. A ladder may be seen in the bottom right hand corner.

Other Information - Location: Richardson describes his visit to Zhwa'i lhakhang in 1948 in 'The Chapel of the Hat', chapter 61 of High Peaks, Pure Earth , London, Serindia Publications, 1998, pp. 722-726. "He [a monk] led us to the doorway of a small but solid three-storeyed building, red-washed stone below and white above. My eyes brightened as I saw two fine stone pillars with writing on them, one on each side of the door. ... They were thickly splashed with the red-wash which covered the walls of the building, so that much of the inscription was illegible. A monk who joined me promised to have it cleaned tomorrow. (p.724)

Other Information - Historical background: The translation of the inscriptions on the two pillars may be found in A Corpus of Early Tibetan Inscriptions [ Hertford: Stephen Austin and Son, Royal Asiatic Society, James G. Forlong Series, No. XXIX, 1985, pp. 43-63]. They record priviledges granted at different times "to Ban-de Myang Ting-nge-'dzin who founded the temple and who, as seen from the inscriptions, was the guardiam of Khri Lde-srong-brtsan when young and later, as a minister of state, was instrumental in establishing him on the throne." (p.43)