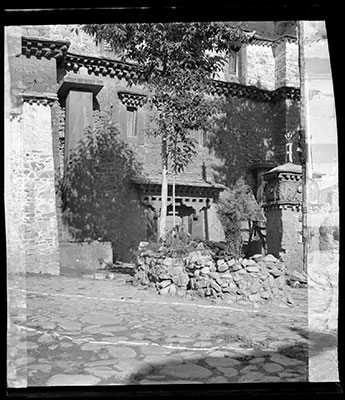 The two inscription pillars (the west one on the left and the east one on the right) which were on either side of the temple doorway in the courtyard of Zhwa'i lhakhang monastery. The pillars are partly in shade and there is a square-shaped shrine with a banner decoration topped by a trident on the right of the photograph.

Other Information - Historical background: The translation of the inscriptions on the two pillars may be found in A Corpus of Early Tibetan Inscriptions [ Hertford: Stephen Austin and Son, Royal Asiatic Society, James G. Forlong Series, No. XXIX, 1985, pp. 43-63]. They record priviledges granted at different times "to Ban-de Myang Ting-nge-'dzin who founded the temple and who, as seen from the inscriptions, was the guardian of Khri Lde-srong-brtsan when young and later, as a minister of state, was instrumental in establishing him on the throne." (p.43) [KC 23/09/2006]