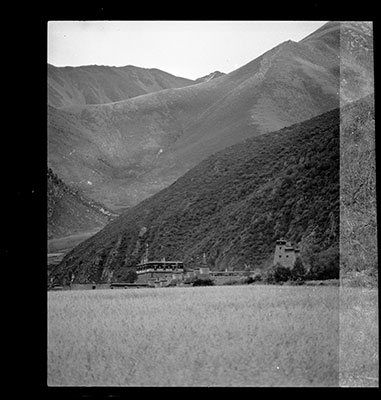 Yangri monastery (yang ri dgon) an important Trigunpa ('bri gung pa) monastery in the valley of the Shorungchu, a tributary of the Kyichu river to the east of Lhasa. The main temple (lha khang chen po) may be seen on the left of the complex and the tower used to display a ceremonial religious banner on the right. There are a number of reliquary monuments (mchod rten) in the front. There are rocky mountains in the background and a cultivated field in the foreground. a light strip may be seen on the right-hand edge of the photograph.