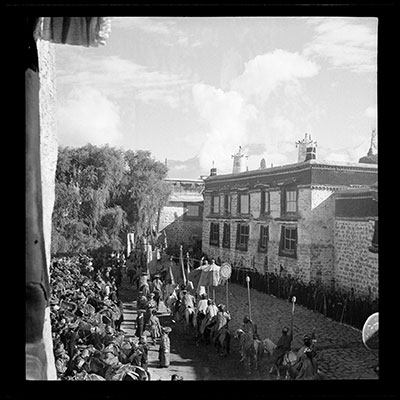 Horsemen in ceremonial robes carrying standards, ceremonial umbrellas and round-shaped emblems accompanying the Dalai Lama to the Jokhang on his return to Lhasa. They are making their way along the Barkhor to the main entrance of the Jokhang. They are either preceeding or following the sedan chair carrying the Dalai Lama. There are monks standing up against the wall of the building in the centre housing the offices of the Cabinet and officials standing on the left.

Manual Catalogues - Notes on negative album (outer case) - (on front) 'Kodak NEGATIVE FILE' in red and yellow lettering and a white label with 'Z.' in black ink'; (on reverse) 'Kangchenjunga. Gangtok Dances. RETURN of DL. Yak dancers etc. BIRDS etc.'; the letter 'A' in the top left hand corner and '8' in the right hand corner all written in white. (On spine on yellow "Subjects" label) ' GANGTOK . LHASA . PEOPLE . D.L. animals Birds; [Dates] 1936-40' written in Richardson's hand in blue ink; (below the label) the number '8' in white overwritten by the letter 'A' in pencil. Notes on negative album - (on cover) '8, Kangchenjunga. Gangtok Dances. RETURN of DL 1939. Yak dancers. Lhamo. Officials Tests. BIRDS...'. (On the spine) "KODAK NEGATIVE FILE 2 1/4 X 2 1/4 IN. (6 X 6 CM.) in embossed gold lettering; the letter "A" in white in Richardson's hand. Notes on negative index inside the negative album under 'Subject' - 'MISSING' [incorrect]