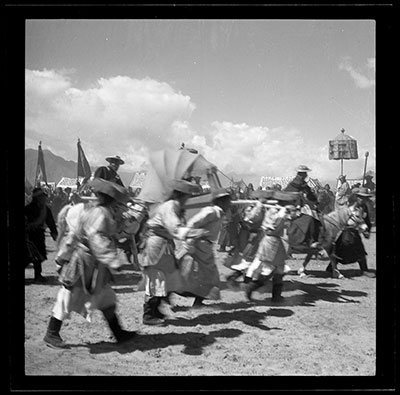 A sedan chair carried by a group of men dressed in ceremonial light-coloured silk uniforms. The chair which has curtains possibly contains the Dalai Lama and an umbrella is being held aloft nearby. There are mounted monk officials near the chair. This could be the start of the last leg of the Dalai Lama's journey to Lhasa. Appliquéd tents can be seen in the background.

Manual Catalogues - Notes on negative album (outer case) - (on front) 'Kodak NEGATIVE FILE' in red and yellow lettering and a white label with 'Z.' in black ink'; (on reverse) 'Kangchenjunga. Gangtok Dances. RETURN of DL. Yak dancers etc. BIRDS etc.'; the letter 'A' in the top left hand corner and '8' in the right hand corner all written in white. (On spine on yellow "Subjects" label) ' GANGTOK . LHASA . PEOPLE . D.L. animals Birds; [Dates] 1936-40' written in Richardson's hand in blue ink; (below the label) the number '8' in white overwritten by the letter 'A' in pencil. Notes on negative album - (on cover) '8, Kangchenjunga. Gangtok Dances. RETURN of DL 1939. Yak dancers. Lhamo. Officials Tests. BIRDS...'. (On the spine) "KODAK NEGATIVE FILE 2 1/4 X 2 1/4 IN. (6 X 6 CM.) in embossed gold lettering; the letter "A" in white in Richardson's hand. Notes on negative index inside the negative album under 'Subject' - 'DQ'