The interior of the Peacock Tent at Doguthang 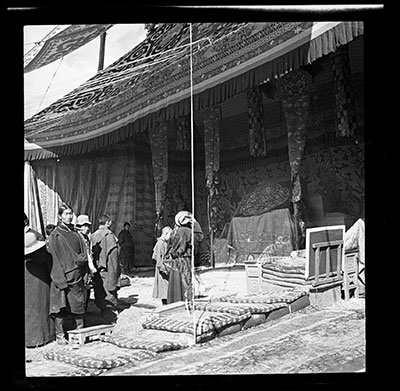 The 'Peacock Tent' (macha chenmo) which was positioned at the centre of the reception camp prepared by the Tibetan government to receive the young Dalai Lama. The Dalai Lama's throne can be see in the centre of the photograph. There are bolster cushions in the foreground for monks to sit on and a higher seat of stacked cushions on the right for a higher monk official, possibly an abbot, to sit on. A group of lay people and a monk can be seen on the left of the image.

Manual Catalogues - Notes on negative album (outer case) - (on front) 'Kodak NEGATIVE FILE' in red and yellow lettering and a white label with 'Z.' in black ink'; (on reverse) 'Kangchenjunga. Gangtok Dances. RETURN of DL. Yak dancers etc. BIRDS etc.'; the letter 'A' in the top left hand corner and '8' in the right hand corner all written in white. (On spine on yellow "Subjects" label) 'GANGATOK. LHASA. PEOPLE. D.L. animals Birds; [Dates] 1936-40' written in Richardson's hand in blue ink; (below the label) the number '8' in white overwritten by the letter 'A' in pencil. Notes on negative album - (on cover) '8, Kangchenjunga. Gangtok Dances. RETURN of DL 1939. Yak dancers. Lhamo. Officials Tests. BIRDS...'. (On the spine) "KODAK NEGATIVE FILE 2 1/4 X 2 1/4 IN. (6 X 6 CM.) in embossed gold lettering; the letter "A" in white in Richardson's hand. Notes on negative index inside the negative album under 'Subject' - 'The Peacock Tent'

Clare harris 2003: The Peacock tent, decorated with silk fabrics for the 14th Dalai Lama’s arrival in Lhasa at the age of four and a half, following his recognition in Amdo (North-Eastern Tibet). A party travelled to the outskirts of Lhasa to greet the new incarnation which included the British Representative in Lhasa, Hugh Richardson and Norbhu Dhondhup (the British Mission translator). In Richardson’s photograph of the tent, Norbhu appears standing next to the Dalai Lama’s throne. Hugh Richardson was the first foreigu-thang, barely three miles outside, where new Dalai Lamas were traditionally accorded a formal welcome by the Tibetan government. // In the middle of the vast plain was erected the yellow satin Peacock Tent used solely for such occasions. Fifteen feet high and covering an area of over one hundred feet square, it had a yellow silk lining and a silk top and was used by the new Dalai Lama for religious audiences; smaller tents for him to sleep, pray, dress and eat were pitched in a rectangular formation around it, and these in turn were surrounded by scores of other tents to accommodate monastic and lay officials as well as foreign delegations from Britain, China, Nepal, Sikkim, and Bhutan. For the better part of two days the Dalai Lama sat calmly on his throne, benignly bestowing his blessings on high dignitaries, monks and commoners, alike. The impassive yet affable manner of the child impressed all who saw him, although his family found quite amusing his apparent preoccupation with the two Britons: the Londoner Reginald Fox, radio operator for the British Mission, whose sandy-colored hair was most unusual in Tibet; and Hugh Richardson, the urbane Scotsman heading the mission, who was resplendent in full diplomatic gear including plumes and spurs. The child's fascination notwithstanding, Richardson eventually gave up wearing the spurs because he could find no way to do so comfortably whi le sitting on cushions in the prescribed cross-legged fashion. // Clusters of government workers and monks scurried about distributing ceremonial pastries and dried fruits to the thousands of celebrants, and a huge trough of dried yak meat was provided from which allure encouraged to grab what they could because doing so would bring prosperity to the land. Everywhere people were gathered in groups singing, offering prayers, and performing regional folk dances." (p. 61)

Other Information - Setting: The Dalai Lama writes about the occasion in his autobiography Freedom in Exile , 1990, London: Hodder & Staughton, "At last, our party began to draw near to Lhasa. It was by now autumn. When we were within a few days' journey, a group of senior officials came out to meet us and escorted our party on to the Doeguthang plain, two miles outside the gates of the capital. There, a huge tented encampment had been erected. In the centre was a blue and white structure called the, Macha Chenmo, the 'great Peacock'. It looked enormous to my eyes and enclosed an intricately carved wooden throne, which was only ever brought out for the purpose of welcoming the infant Dalai Lama back home." (pp. 15-16)