Gyantse Dzong with river in foreground 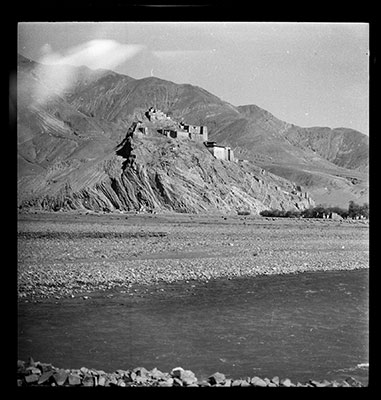 Gyantse Dzong perched on a hilltop with a river in foreground.

Manual Catalogues - Notes on negative album (outer case) - (on front) 'Kodak NEGATIVE FILE' in red and yellow lettering and a white label with 'Z.' in black ink'; (on reverse) 'Kangchenjunga. Gangtok Dances. RETURN of DL. Yak dancers etc. BIRDS etc.'; the letter 'A' in the top left hand corner and '8' in the right hand corner all written in white. (On spine on yellow "Subjects" label) ' GANGTOK . LHASA . PEOPLE . D.L. animals Birds; [Dates] 1936-40' written in Richardson's hand in blue ink; (below the label) the number '8' in white overwritten by the letter 'A' in pencil. Notes on negative album - (on cover) '8, Kangchenjunga. Gangtok Dances. RETURN of DL 1939. Yak dancers. Lhamo. Officials Tests. BIRDS...'. (On the spine) "KODAK NEGATIVE FILE 2 1/4 X 2 1/4 IN. (6 X 6 CM.) in embossed gold lettering; the letter "A" in white in Richardson's hand. Notes on negative index inside the negative album under 'Subject' - 'G[yantse] DZONG'. [KC 11/2/2006]

Other Information - Location: F Spencer Chapman describes a the fortress at Gyantse in Lhasa: The Holy City, 1938, London: Chatto and Windus, "To reach the dzong we rode up and up a rough roadway. Massive wooden gates with crudely stuffed wild yaks and mastiffs hanging in the rafters as emblems of ferocity.//... The dzong is full of small monasteries. ... The dzong which is half ruined, is built tier upon tier to the summit of the steep rock; ... Went right to the top. There are no staircases so that we had to pull the ladder up from roof to roof. ... Superb view:green barley fields, blue winding rivers, russet and sienna hills. The big monastery of Tse-chen lies on the southern side of a rocky hill a mile or two to the north-east." (pp. 54-5) [KC 11/2/2006]