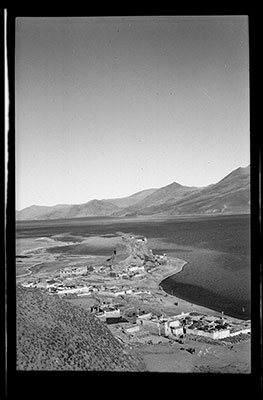 View of Pede dzong fort and settlement on the shore of the Yamdrok Tso lake from above.

Other Information - Pede Dzong (dpal sde rdzong) is situated in Southern Tibet and on the main trade route from Sikkim to Lhasa. The dzong serves as a fort and an administration centre for the district. [TS 18/7/2005]

Other Information - Dates: This is one of a group of related images that have contact prints all with a very distinctive batch development number on the back, which appears to be the number 507 printed in red but is in all cases identically partially indecipherable, indicating that they were all made at the same time. Some of these images relate directly to Richardson's trip to Shigatse in 1938 and this has assisted the dating of this image. Richardson reached Pede on his journey to Shigatse on October 19th [Hugh Richardson Archive, Bodleian Library, University of Oxford, MS Or Richardson 3 folio 51] [MS 19/12/2005]