Figure of Atisha in a temple at Nyethang 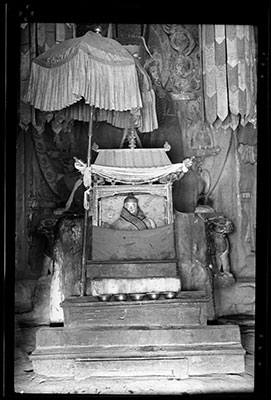 The figure of Atisha (Dipankara) in ceremonial dress enthroned in a shrine in a temple at Nyethang (snye thang sgrol ma lha khang). There are steps leading up to the throne with five bowls of water offerings on the topmost one. There is a gilded roof immediately above his head and a ceremonial umbrella above that. There are typical temple decorations in the background.

Manual Catalogues - Richardson's handlist: 'Blue Album. [No.] 64. 'Image of Atisha at Nye-thang where there is a stupa (mchod-rten) containing his relics.'

Other Information - Background: Richardson describes the the site in High Peaks, Pure Earth , London, Serindia Publications, 1998, p. 314. "On the other side of the Skyid-chu is the famous Snye-thang Sgrol-ma Lha-khang (1936 and later). It was here that Atisa lived for the last years of his life. In addition to fine images of the twenty-one forms of Sgrol-ma (Tara), the templepreserves many precious relics of Atisa: asmall early figure of him, a reliquary vessel holding some of his physical remains, another in which his robe is kept. ..."