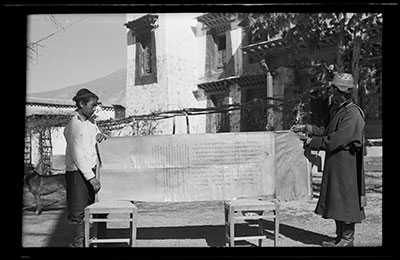 Two men holding the Ming letter which was written by the Chinese emperor Wu-tsung to the eighth Karmapa Mikyod dorje (Mi-bskyod rdo-rje) in 1516. Richardson was shown this letter on a visit to Tsurphu monastery. It is being held unrolled by two men and supprted on two chairs. The scripts written in Chinese and Tibetan are clearly visible. The building in the background is most probably the living quarters (lha brang) of the Karmapa at Tsurphu monastery.