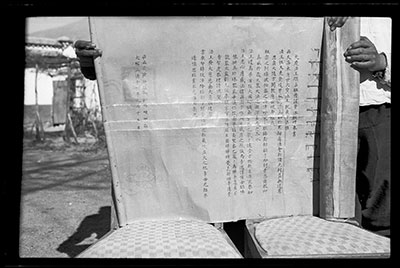 The Ming letter which was written by the Chinese emperor Wu-tsung to the eighth Karmapa Mikyod dorje (Mi-bskyod rdo-rje) in 1516. Richardson was shown this letter on a visit to Tsurphu monastery. It is being held unrolled to show the script written in Chinese. It is possible to see a small area of the Tibetan translation on the right. It is being supported on two chairs.