Travelers with mules waiting to cross at the Gerpa ferry 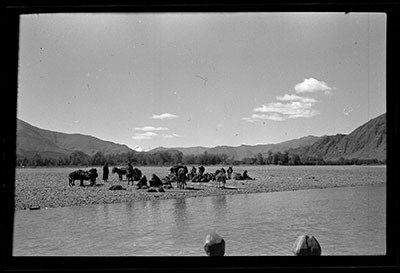 Mules and muleteers waiting to use the Gerpa ferry, four miles upstream from the 'On valley near the Yarlung valley. A part of the ferry may be seen in the foreground.

Manual Catalogues - Richardson's handlist: 'Blue Album. [No.] 45. 'Ferry between S and N banks of the Gtsang-po, opposite Yarlung valley. Gerpa ferry. Sngas-mgo ferry (Album 9 no 77) is a few miles downstream.'