Temple of Kacu near Samye 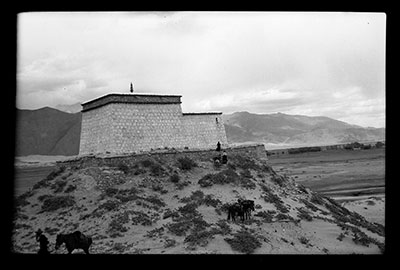 The single-storey white temple of Kacu (kwa cu) standing on top of a hillock some miles east of Samye. There are mountains in the distance and men and horses may be seen descending the hillock.

Manual Catalogues - Richardson's handlist: 'Blue Album. [No.] 44. 'also' [Small temple to the east of Bsam yas, behind the Has-po-ri, called Has-po rgyab, said to date from the time of the Kings and to be contemporary with Bsam-yas].

Other Information - Location: Richardson mentions this temple in High Peaks, Pure Earth , London, Serindia Publications, 1998, p. 317. "... and some miles further east [of Ha po rgyab] on a small hillock overlooking a little pool was Kwa-cu (1949), a similar, single-storey white temple, possibly eighth or ninth century, with images of the Religious Kings in it."