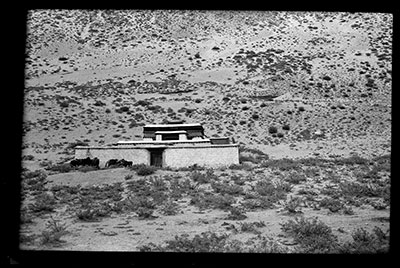 The temple of Hepogyap (has po rgyab) near Samye. It is a small one-storey white building on the east side of Hepori hill on the south side of the monastery. This photograph shows the front of the building and there are horses up against the wall of the enclosure.

Manual Catalogues - Richardson's handlist: 'Blue Album. [No.] 43. 'Small temple to the east of Bsam yas, behind the Has-po-ri, called Has-po rgyab, said to date from the time of the Kings and to be contemporary with Bsam-yas'.