Bronze bell hanging at the entrance of the Utse, Samye 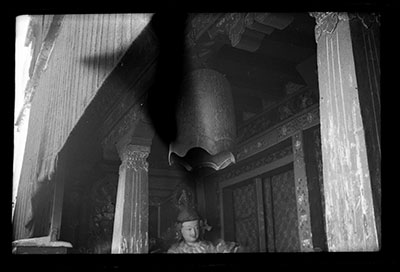 The bronze bell hanging at the entrance to the Utse temple at Samye monastery. There are carved pillars either side of it and a decorated and painted door frame of the temple behind it. Directly below it is the figure of a guardian deity. On the left of the photograph a textile hanging can be seen which was a common form of protection of painted surfaces from the sun.

Other Information - History: Richardson describes this pillar and translates the inscription in A Corpus of Early Tibetan Inscriptions, Royal Asiatic Society, James G. Forlong Series, No. XXIX, Hertford: Stephen Austin & Sons Ltd, 1985, pp. 32-3. "Hanging at the entrance to the gtsug-lag-khang of Bsam-yas is a fine bronze bell of Chinese design. An inscription in two lines runs round the upper part. It is divided into panels by vertical strapwork decoration. ... [A translation of the inscription reads as follows:] "Queen Rgyal-mo-brtsan, the mother and her son, had this bell made for the worship of the Three Jewels of the Ten Directions and pray that by the power of that merit the Divine King Khri Srong-lde-brtsan, father, son and consort, may be endowed with the harmonius sound of the sixty attributes of the voice of the Buddha and attain supreme enlightenment."