The Utse temple at Samye monastery 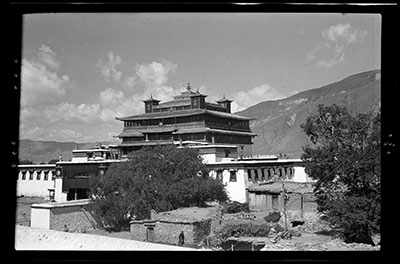 The four-storeyed Utse (dbu rtse) temple situated at the centre of Samye monastery and representing Mount Meru, the centre of the universe. The are rough stone buildings in the foreground which may have been monks' quarters. A monk is standing in front of one of these buildings

Other Information - Background: Richardson visited Samye in 1949 and describes the site in High Peaks, Pure Earth , London, Serindia Publications, 1998, p. 315-6. "About twenty-six miles downstream [of Gong-dkar Rdzong] on the north bank [of the Tsangpo] is Bsam-yas (1949), "Beyond Imagining", the oldest, most famous, most beautiful and most numinous of Tibetan monasteries. Founded in 779 by Padmasambhava and the Indian pundit Santaraksita under the patronage of the King Khri Srong-lde-brtsan, it was conceived as the realization of an ideal universe in the form of a mandala. The spacious precinct is surrounded by a high wall representing the ocean, with a differently shaped temple at each of the cardinal points for continents and smaller island temples on either side. Some way inside the wall are four large mchod-rten , each in the colour appropriate to its geogaphical position - red at the south-west, black at the north-west, blue at the north-east, and white at the south-east. At the centre, enclosed in a high wall piercwed by doors on the east, south, north and west, stands, foursquare, the great dbu-rtse or gtsug-lag-khang , the symbol of Mount Me-ru, the centre of the universe. It is ... four storeys tall, having been vandalised and half destroyed by the Chinese in 1966. The lower two storeys are of massive white dressed stone, the upper two of fine timber, the topmost being of smaller dimensions than the other three, giving a rather pyramidal appearance. ..."