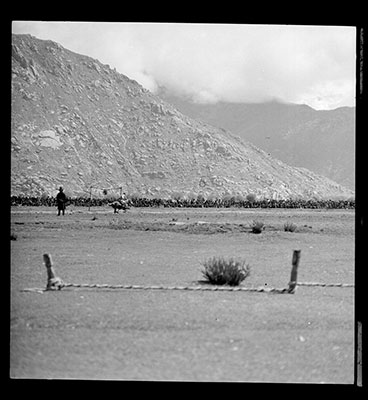 A horseman riding past a target suspended from a wooden frame at Dzonggyap Shambe. There is a crowd of spectators in the background and a rope stretched between two posts used for tethering horses in the foreground.

Other Information - Dates: The year '1948?' has been written on the back of the print. Also the print size and print out paper makes it part of a group of images that all seem to have been taken from 1946 onwards as the contain images of the new Nechung Oracle who assumed his position in 1948 and inscription pillars that Richardson visited only during this time [MS 16/12/2005]