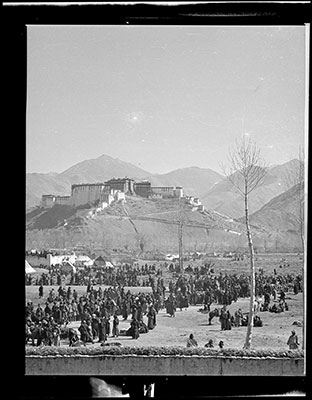 Crowds behind the Potala at the Dzonggyap Shambe festival. There are pitched tents in the centre and a number of low buildings on the left.

Manual Catalogues - Richardson's Hand List: 'Negative album No.1. ... The Rdzong-rgyab Zhabs-'bel This ceremony takes place on the 26th day of the 1st month (The Byams-pa gdan 'dren on 25th is in another neagative file). The Rdzong-rgyab Zhabs-'bel, "The Gallop at the back of the Fort" takes place on a sandy plain to the north of the Potala, near the Lha-klu house. It is the exercise for the rta-dmag , feudal cavalry. Nos. 78-90. The horsemen ride down a sandy track and fire at three targets set up at intervals along it; they use a musket at one target and bow and arrows at the others. At the end, the horsemen come in their different sections to salute the Kashag and receive a scarf and some money. (no 94 is a general view)' [KC 23/10/2006]