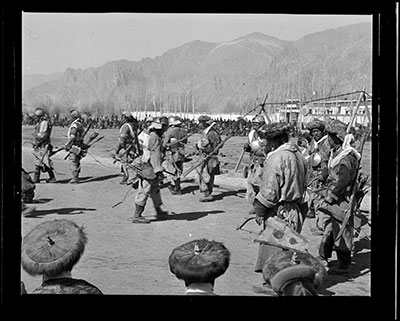 Soldiers dressed in 17th century Tibetan/Mongol army uniform at Dzonggyap Shambe. They have received white scarves which they are wearing around their necks as rewards for competing in the riding/shooting challenges. They are carrying their rifles, bows and quivers of arrows. The men in the foreground with their backs to the camera are officials wearing a variety of different hats including the wogor (wa sgor) made from otter skin and a flat-topped hat.