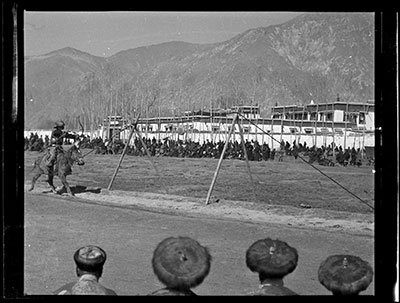 A horseman shooting at a target suspended from a wooden frame at Dzonggyap Shambe. He is using a bow and arrow. There is a crowd of spectators in the background. The Lhalu mansion is the white building in the background. In the foreground there are four officials seated with their backs to the camera. Three of them are wearing wogor (wa sgor) hats made out of otter skin. The person on the left of the image is wearing a smaller hat made of brocade and fur.