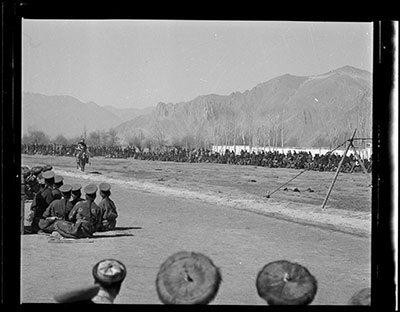 Officials, servants and spectators at Dzonggyab Shambe (rdzong rgyab bzhan 'phel) on a sandy plain behind the Potala. There is a small group of servants with flat hats and tie-die robes on the left. A horseman is approaching. A wooden frame secured by a rope can be seen on the right. The target the horseman will aim for is probably secured to it. The white wall surrounding the Lhalu mansion may be seen on the right of the photograph.