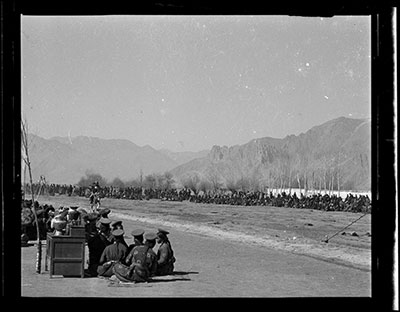 Officials, servants and spectators at Dzonggyab Shambe (rdzong rgyab bzhan 'phel) on a sandy plain behind the Potala. On the left of the photograph there is a wooden table with metal jugs and cups. Immediately beside the table there is a small group of servants with flat hats and tie-die robes. Several tall branches with white flags may be seen. The jugs are probably filled with beer (chang) with which the winners of the challenges were rewarded. They were probably served by the servants sitting beside the table. The spectators are watching a horseman just visible in the background who is riding along the straight. The white wall surrounding the Lhalu mansion may be seen on the right of the photograph.