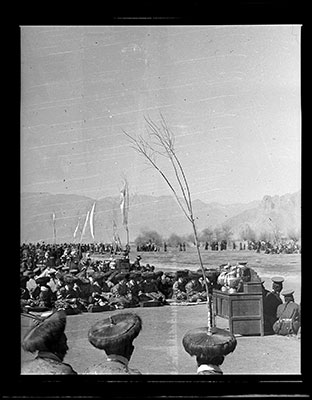 Officials at Dzonggyab Shambe (rdzong rgyab bzhan 'phel) seated on carpets on a sandy plain behind the Potala. They are wearing ceremonial dress. On the right of the photograph there is a wooden table with metal jugs and cups. Several tall branches with white flags may be seen. The jugs are probably filled with beer (chang) with which the winners of the challenges were rewarded. The hats of the officials in the foreground can clearly be seen. They are made of otter skin and decorated with a golden ornament on the top.

Other Information - Background: See Hugh E. Richardson, Ceremonies of the Lhasa Year , 1993. London: Serindia Publications. pp. 56-7. "The name of this ceremony, the Dzongggyap Shambe, is uncertain. The common version of the spelling is rDzong-rgyab Zhabs-'bel , 'The Gallop Behind the Fort"; but there is another, rDzong-rgyab g Zhar-'phen, apparently meaning "The shooting in Succession Behind the Fort". At all events what happens is a competition between men of the Yaso's cavalry in a display of markmanship at targets suspended beside a narrow runway in a meadow north of the Potala and south of the Lhalu mansion. Tents are pitched there for the Kashag and high officials and for foreign guests; lesser officials sit on rugs on the ground in order of precedence; places are allotted to boys of the Tse school, servants of government offices and the Dalai Lama's dancing boys; and a tent is set up for the cooks who provide the refreshments, in recognition perhaps that this has been an unusually busy month for them. After the arrival of the Kashag there are the usual formalities. The Yaso present scarves to the Kashag and submit lists of the competitors; and, of course, tea is served. Each squadron provided by the noble houses then takes part separately. One after the other the horsemen ride down the runway firing with a matchlock with antelope-horn prongs at the first target, then rapidly swinging the gun round their backs they grab the bow and take an arrow from their quiver ready for the next target. Some do not have time to draw the bow but simply thrust the arrow at the target. " (pp. 56-7)[KC 23/10/2006]