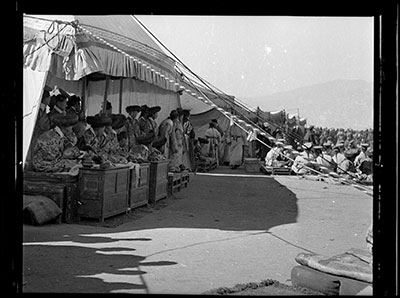 The tent of the Kashag (the cabinet) at Dzonggyab Shambe (rdzong rgyab bzhan 'phel) on a sandy plain behind the Potala. A number of officials are seated on raised cushions with wooden tables in front of them while others are standing. They are all wearing ceremonial dress. Other pitched tents may be seen and lesser officials are sitting on the ground on the right in the open air.

Manual Catalogues - Richardson's Hand List: 'Negative album No.1. ... The Rdzong-rgyab Zhabs-'bel This ceremony takes place on the 26th day of the 1st month (The Byams-pa gdan 'dren on 25th is in another neagative file). The Rdzong-rgyab Zhabs-'bel, "The Gallop at the back of the Fort" takes place on a sandy plain to the north of the Potala, near the Lha-klu house. It is the exercise for the rta-dmag , feudal cavalry. No. 77. The Kashag in their tent watching the ceremony.' [KC 26/7/2006]