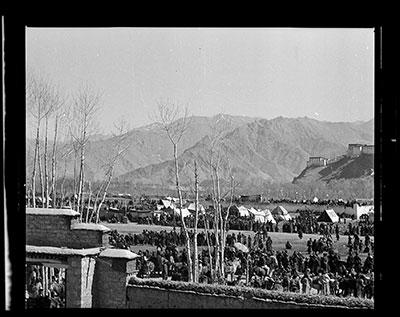 Tents are pitched in the centre of the image for the 'Galloping Behind the Fort' Dzonggyab Shambe (rdzong rgyab zhan 'phel) ceremony held on the 26th day of the 1st month. It was held in a long narrow valley in a medow behind the Potala palace which can be seen on the right of the image. The photograph was taken from the Lhalhu mansion, the entrance gate of which may be seen in the left-hand bottom corner.

Manual Catalogues - Richardson's Hand List: 'Negative album No.1. ... The Rdzong-rgyab Zhabs-'bel This ceremony takes place on the 26th day of the 1st month (The Byams-pa gdan 'dren on 25th is in another neagative file). The Rdzong-rgyab Zhabs-'bel, "The Gallop at the back of the Fort" takes place on a sandy plain to the north of the Potala, near the Lha-klu house. It is the exercise for the rta-dmag , feudal cavalry. No. 75 is the general scene.' [KC 26/7/2006]