Monks outside Jokhang during Lugong gyalpo 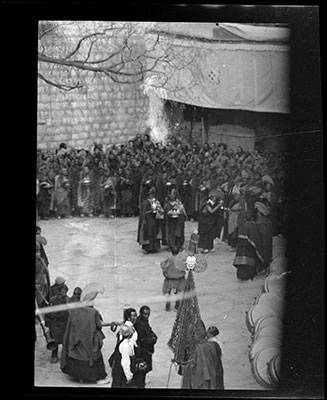 Monks performing an exorcistic ceremony in front of the main entrance of the Jokhang during the Lugong gyalpo ceremony. Three of the monks in the centre of the photograph are holding ritual items and have white cloth around their faces. In the background there are monks playing cymbals and hand-held drums may be seen on the right-hand side of the image and horns (dung chen) on the left. In the foreground, four laymen and a monk are standing around a triangular filigree metal structure topped by a white skull with wings which is the type of structure which tops a torma (gtor ma). There is a horizontal white line across the bottom part of the image.

Other Information - Dates: This photograph was taken after 1939 as the structure that previously stood over the bench where the Shengo would sit during ceremonies in the First month of the Tibetan year has been removed. Between 1940 and 1948 alterations were made to the Jokhang, an additional window was placed in the wall in the background of the image and the small roofed structure was removed. This has assisted the dating of this image [MS 17/6/2006]