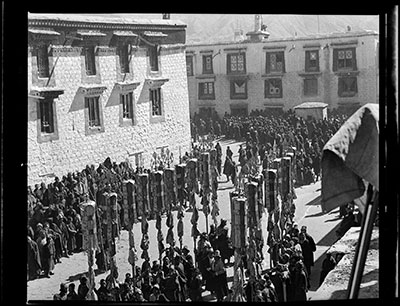 A double line of laymen carrying gyaltsen (rgyal tshen) Victory Banners along the Barkhor, close to the south west corner of the Jokhang during Monlam Torgya. They preceded the Torma in its journey from the Jokhang to the place where it was destroyed. The Victory Banners represent the victory if Buddhism over Hinduism. The streets are lined with crowds of spectators. A tripod with a camera covered by a piece of cloth can be seen on the right positioned on the balcony of the Doring house from where this photograph was taken.

Other Information - Background: See Hugh E. Richardson, Ceremonies of the Lhasa Year , 1993, London: Serindia Publications, pp 39-49 for a description of the Monlam Torgya ( mon lam gtor rgyag) ceremony. "The ceremony of Monlam Torgya is the longest and the most spectacular event of the New Year celebrations. It is the high point of the Yaso's tenure of office and the day for which the Tsisher was the preparation. (p. 39) ... The horns sound a long blast, the drums beat and the cymbal players turn toward the Jokhang entrance clashing their cymbals. A double line of laymen carrying tall cylindrical banners come out and after them the torma, in which all evil influences are stored, is brought out by a body of well-dressed laymen. ..." (p.45) [KC 23/10/2006]

Other Information - Symbols: Gyaltsen are one of eight auspicious symbols ( bkris shis rtags brgyad ) representing the victory of Buddhism over Hinduism. [TS 8/2/2005]